Wikipedia obscured? Here we explain you why

Wikipedia obscured? Yes but only for few days, it’s back online from the 5th of July 2018 at around the 12:20, after two days of darkness. Who tried to enter in every page of Wikipedia Italia between the 3th and the 5th of July, infact, was faced with a Wikipedia’s message, where it explained the reasons of the closing, protesting against the European Union. The 5th of July, after that the european parliament postponed in September the vote about the new regulations about the Copyright, Wikipedia reopened the pages to everyone.

Wikipedia is the most famous and the most used online encyclopedia and see it closed for some days created many inconveniences, due that nowadays most of the researches see it as the undisputed protagonist. Who tried to enter in every page of Wikipedia just saw a message that said: “The Wikipedia’s italian community decided to obscure all the pages of the encyclopedia. We want to continue to offer a free, open and cooperative encyclopedia with verifiable contents. We ask to all the european parliament members to reject the actual text of the directive and to reopen the debate considering the many proposals of the Wikimedia associations, starting from the abolition of the art. 11 and 13, as well as the extension of the Panorama’s freedom to all the UE and the public domain’s protection”. The Wikipedia’s pages wasn’t been obscured only in Italy but in many european countries, like Spain, Estonian and Latvia. In UK and Poland, instead, Wikipedia, put an informative banner about the directive in all its pages.

The directive about the copyright

The mentioned articles by Wikipedia are like we said the 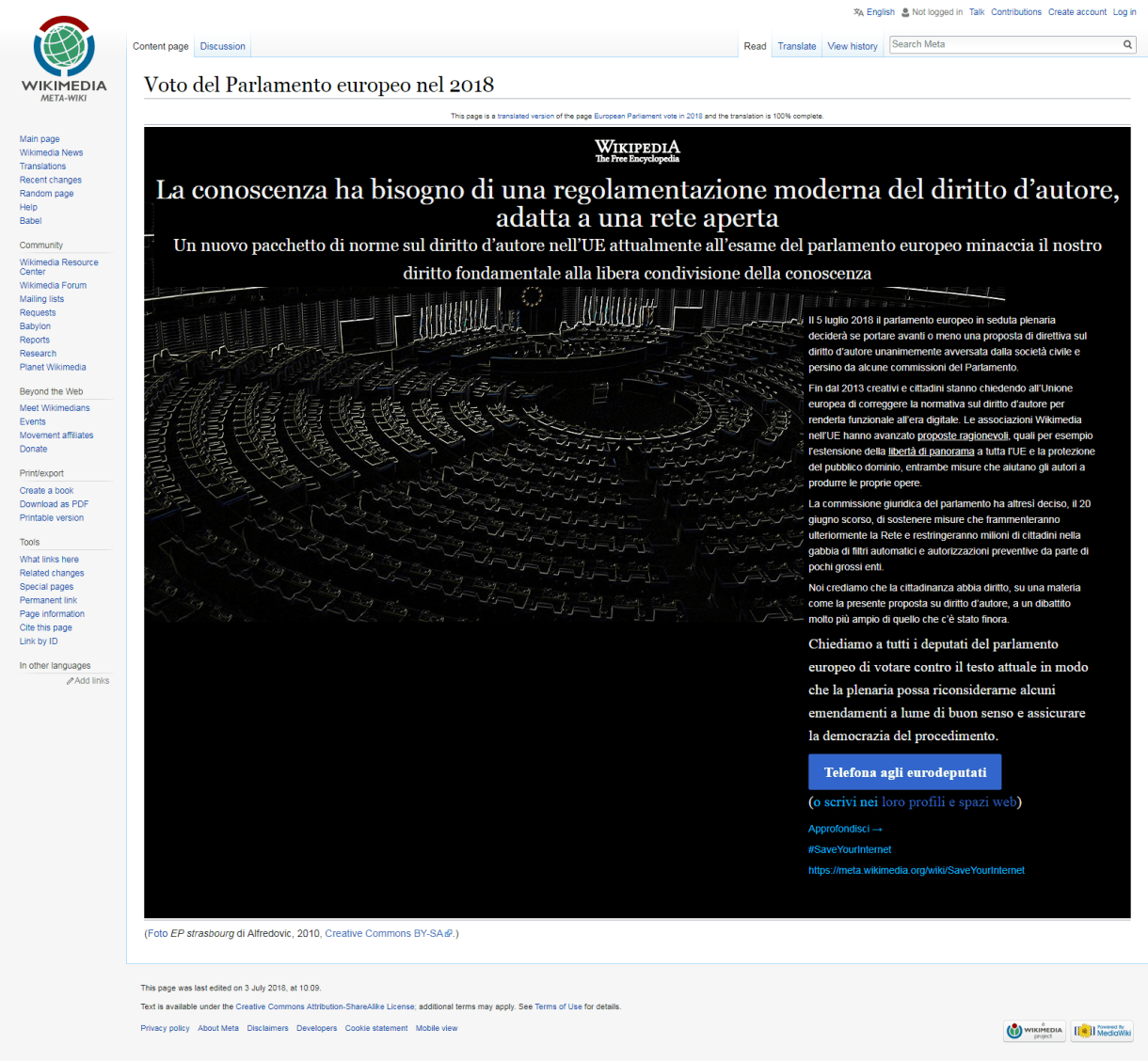 11 and the 13 of the copyright’s directive. The article 11 is the so-called “link tax”, that’s mean that who will put a link must have an authorisation from the author of the linked or just mentioned content and he will have to pay to him a fee. While in the article 13 is closely linked with the copyright, it provides a check for verify that won’t be violated the authors’ rights. This according to the European Union will stop the looting and will deny to who copies to earn from it. Everything happend after the GDPR (General Data Protection Regulation) and after the scandals that saw as protagonist Facebook. The UE though found many that want to obstruct this legislative proposal, like Wikipedia, which says: “If the proposal will be approved, it could be impossible to share an article on the social networks or find it on a research engine. Wikipedia would risk to close”. It is feared infact that this can drastically limit the freedom of expression on internet. Social networks like Facebook, that are now become real informations’ journals, will drastically change and Wikipedia, which is created, wrote and reviewed by the users won’t be able to follow the new rules, which could bring it to finally close. All of this, furthermore, will radically change the online information.

Even though the European Union promptly answered to the Wikipedia’s protest, declaring that it and the other online encycolpedias will be automatically excluded from the directive because they freely publish and without profit goals, the protest went on until the final postponement in September of the vote. For the moment Wikipedia seems to have won its battle, the european parliament infact rejected the directive. By the way members of the european parliament was splitted in half, many infact were supporting the directive even if to win was the no. Now the directive’s text will be resubmitted in September, meanwhile could be presented further amendments. To exult for the victory wasn’t only Wikipedia, but many Bigs of the informatic and technologic world, like Google, Apple, Amazon and Facebook, which consider it “the victory for the democracy”.

10 years of success for the App Store