The science fiction is the storytelling of some events which could really happen in a more or less next future. Even the more vivid imagination find difficult to relate with something for all of us absurd, but sometime the reality is able to pass the imagination. The science fiction literature and cinema always surprised us and made us dream about incredible technologies, most of them, though, as the years go by, become reality.

The Nautilus is the first submarine of the humanity’s history, at that age, though, it could be seen only with the imagination. We found it in 20000 leagues under the sea, a romance by Jules Verne, from 1870.  Verne describes, therefore, in his romance suits very similar to the current sub ones and he talks about the electric energy, as he’s talking about a magic force: “There’s a powerful, obedient, swift, and effortless force that can be bent to any use and which reigns supreme aboard my vessel”.

The George Orwell’s romance, “1984”, written in the 1948, talks about a world controlled by the Big Brother, prying eyes of the government, which controls every movement of the citizen, exactly like the today’s CCTV. “The Big Brother is watching you”, is the slogan of the dystopian world of 1984, years before the video surveillance spread.

Smartphone and tablets are now essential objects in our everyday lifes, like the actions that they can do, like video calls. But years ago all of this was impossible, and say hi face to face to someone that was on the other side of the world, was simply science fiction. Despite this, there were many movies that predict the arriving of multifunctional smartphones and video calls: Star Trek (1966), Back to the Future (1985), 2001: A Space Odyssey (1951), etc.

“The new world” is a dystopian romance written by Aldous Huxley, in the 1932, but placed in the 2540. In his romance Huxley describes a medicine that controls the emotions, he called it “Soma”, predicting so the antidepressant, which will be started to be studied not before the ’50s.

One of the darkest chapter of human race’s history, the “Atomic Bomb”, which is  been invented in the 1935, but it is been predicted by H. G. Wells in a romance from the 1897, “The war of the Worlds”. 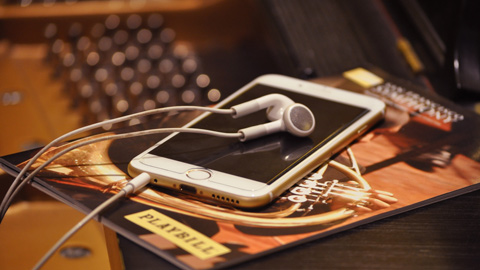 The headphones that everday we use to listen the music, small, practical and comfortable, were once unthinkable, for everyone except to Ray BradBury, that for the first time desribed an object really similar to the modern headphones, in the 1953, in the romance that made him famous, “Fahrenheit 451”.

“Ralph 124C 41+”, is a science fiction novel written by Hugo Gernsback, in the 1911. The writer, between the other things, predicted the solar panels, more than 50 years before that the first calculator with solar energy was invented.

In the 2014 Google said to the world that it implemented its translator with the real time vocal translation, but it was 34 years before, that someone talked about it, in the romance “The Hitchhiker’s Guide to the Galaxy” by Douglas Smith. Besides Google, now even Skype upgraded its video calls with the translator’s function.

“Snow Crash” is a science fiction romance, written by Neal Stephenson in the 1992. Stephenson imagines an America dominated not any more by the government but by the big corporations, where the people can run away from the reality, founding shelter in the Metauniverse, a virtual reality where everybody can enter trought an avatar, which will be free to go around cities, houses, clubs and buildings, a real parallel world. Eleven years after, in the June of 2003, the LindenLab launched a platform that became famous in the whole world, “Second life”.

A multitude of predictions by Back to the Future

If we have to talk about Back to the Future, famous science fiction movie of the ’80s, we can’t talk only about one prediction. Yes, because the movie is a real gold mine of predictions, starting from the flat screen televisions, the smartphones and video calls, until the augmented reality glasses. But what really impressed the videogamers that they were waiting for, with anxiety, that became reality, were the videogames playable without any joystick.

All of this were considered impossible, but it became reality. For this reason let us fly with the fantasy and who knows if one day we can touch with our hands the today’s science fiction.

10 ideas for a technological house with zero carbon footprint, or almost

Another Life: the serie Netflix which made all talk about itself