Life and death on the Moon

The mission Chang’e-4 arrived on the Moon the last 3th of January. Just few days after that the lander Yutu 2 moved its first steps on the dark side of the Moon.

With them, on the satellite, even the small cylinder which comes from the University of Chongqing, the mini lunar biosphere. The biosphere contained seeds of potatos, cotton, rapeseed, yeast and arabidopsis, as well as eggs of silkworm and fruit flies.

The 15th of January the images sent back on the Earth confirmed that the cotton seeds were sprouting. For the first time in the humanity’s history were grow something on the surface of our natural satellite. There is life on the Moon!

By the way the enthusiasm was short, the lunar night arrived too soon. A frozen and undeniable night, that let the temperature drops to -170°. The lunar cotton sprout died from the cold, just few days after its birth. 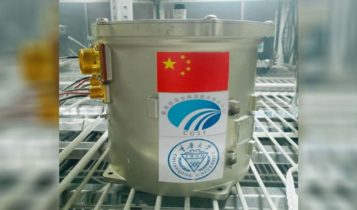 The small cylinder that host the terrestrial life forms, sent on the cold dark side of the Moon, is inside a sealed container, which is onboard of the Chang’e-4.

The cylinder is just 18 centimeters tall and it weights 3 kg. Together with the seeds and the eggs, inside it there is oxygen, water and nutrients. A biosphere thought and realized to test the photosynthesis and breathing’s processes.

Anyway only the cotton seeds were able to sprout. The scientists that work on the project known since the beginning that the biggest problem to solve was the one of the severe lunar temperature.

Right for this reason, the container was equipped with a small tube that radiated the greenhouse with the sun light. 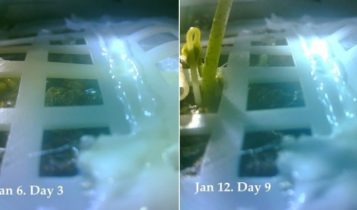 Seeds and eggs underwent to a treatment that sent them in lethargy, durint the trip Earth – Moon, which was 20 days long.

Arrived to destination, from the Earth arrived the command to irrigate and the mini ecosystem woke up. The plants were supposed to sprout, giving the needed oxygen to feed the greenhouse.

Oxygen that would serve by sustenance for the flies. Those would eat the yeast and they would create CO2 , which would improve the photosynthesis.

Nothing though seems to be awake from the sleep of the travel, besides the cotton seeds. The short life of the cotton plant was the only one observed. Even if it was short, though, this is the first terrestrial life form to be born on a planetary body different than the Earth.

Day and night on the Moon

The lunar rotation is about 27 days long. So here we find a day and a night almost two weeks long. In the same period of time the Moon makes an orbit around the Earth. And that’s why it always shows us the same face.

Day and night alternate on the whole surface, even on the dark side, only that from the planet we are not able to see it.

Without the atmosphere the temperature variation between day and night is extreme, passing by the 100° of the day to the -170° of the night. It is for this reason that extreme precautions have to be taken even for equippments and experiments.

Yutu-2 few days after the beginning of the mission were under the burning sun of middle day, at 120°. For this reason it went in a resting mode to protect the instrumentations.

Now that the night fall even Chang’e-4 is in the same mode, to protect the instrumentations and all the contents from the frozen. By the way it wasn’t enough. The temperature inside the biosphere fell down to -52°, and the whole content froze.

The cotton plant is death, while the other life forms will never wake up. When the day will come back, on the hidden face of the Moon, the temperature will come back burning and the whole ecosystem will decompose.

There won’t be any risk of contamination for the satellite. Everything will stay perfectly sealed inside the container. 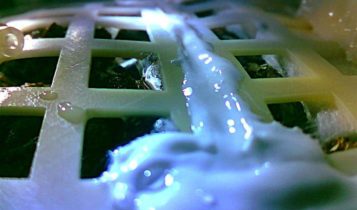 Even though this it remains the primacy, undeniable, that this small cotton plant is the first terrestrial life form to be born on a planetary body different than the Earth.

Another record for the chinese space agency. The 15th of January the China National Space Administration and the Advanced Technology Research Institute of the University of Chongqing, gave proudly the new of the plant’s birth.

Together with it the agency collected other records: it is the first mission on the dark side of the moon and its predecessor Chang’e-3 was the first one to come back on the Moon after more than 40 years.

The cotton’s sprout isn’t the first spacial vegetable. On the international space station were already served salads of spacial lettuce. But this is the first one to be born on a planetary body.

LSC: the windows that collect energy