The humanity like always leaves behind it a garbages’ wake, on the planet and outside it. But there is who moreover wants to find a solution, and for this reason was born RemoveDebris: the space debris’ hunter.

The humanity always wondered what’s there over the sky of our planet. For many years, now, the spacial missions gradually increase, pushing them ever more away, by finding something new, by creating something new.

But there is a downside, where all the satellites, the probes and the vehicles that ended their mission are sending in retirement go? How many times we heard about all of those spacial debris in orbit or outside, in the infinite space. How many of us thought that soon or later it would become a problem? 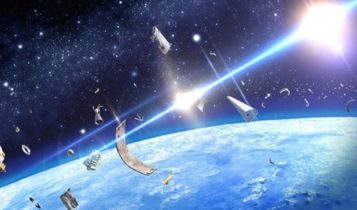 The space debris aren’t just ugly to see, or to think, if with naked eyes are impossible to see. They aren’t too pollution neither, outside the atmosphere they will never deteriorate themselves.

But they are dangerous, they could leave their orbit around the planet and crash on it, or on the alive spacial station.

Like the problem of less than one month ago finds out on the ISS, it could be a meteor this time, but it can’t be excluded that it can happen even with small space debris of old missions.

It could be a problem for the realization of future spacial missions, which will have to find a solution to avoid to crash with the garbage, like for example for the space elevator.

And the space debris increase ever more, ended missions abandoned alone in the space, like Starman, that who knows when, one day, he will come back on the planet Earth.

We don’t even know how many the debris actually in orbit are, only the American Space Surveillance Network keeps under control around 8.000 space debris, which run at a speed up to 27.000 km/h. 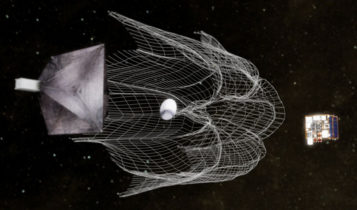 RemoveDebris, a cleaner satellite that quick catches the space debris. RemoveDebris is a project of the University of Surrey, in the United Kingdom, coordinated by Guglielmo Aglietti.

The satellite reached the terrestrial orbit already the last April, on board of a SpaceX rocket, the Falcon9. RemoveDebris started its mission, brilliantly ending the first test the last 16th of September.

The garbage is been captured by the web as predicted and, according with the calculations, it would be destroyed during its return in the atmosphere, in a couple of months. The first test made had the purpose to prove the efficiency of the web and the launch of it, but in the future could be added small propellers that will speed up the return of debris.

The web isn’t the only beauty of RemoveDebris, in the next weeks, Aglietti and his whole team, will be focused to make further tests. The next experiment, which would happen soon, provides the launch of a further fake space debris, that will be harpoon by the satellite, so to prevent it to go around the Earth.

The last experiment, instead, will see unfortunatelly the end of the same RemoveDebris, because will be it to simulate a space debris. By using a sail, RemoveDebris will slow down its run, by forcing itself to return in the atmosphere, where it will be disintegrated by it.

Ended the experiment, in few months, will be launched a new RemoveDebris, or maybe more than one, that will go hunting real space debris. The sacrifice of this small space satellite, so, will be rewarded if everything will go like predicted.

Art 2.0: the art in the informatics age