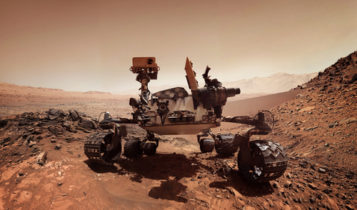 The material studied in laboratory by Jennifer Eigenbrode and her team are samples took by Curiosity between the 2012 and the 2016 from the martial ground. The martial stones of what we are talking about are been dated 3,5 billion of years, period of time during which the organic matter was preserved inside it and it arrives until today, on the Curiosity’s nose. The rover found the stones with their precious load inside the crater Gale, where once there was a lake, at only 3,4 cm of depth. Specifically the ones found were organic molecules carbon-based, considered the base of life as we know it. In the sediments there were Thiophene, 2-meltilofene, 3-meltilofene, metantiolo and dimetile sulphide. We have to say then that the study is been made by the analysis’ laboratory of Curiosity, which isn’t so sophisticated to be able to establish if the molecules found are part or not of more complex molecules. The presence of complex organic matter on Mars isn’t the surely proof of the life on the planet, but it is the proof that, more or less in the same period when was arise the life on the Earth, even our closer neighborn had the ideal conditions to host the life, with liquid state water, an atmosphere and now we know even organic molecules carbon-based.

The second proof of the possible presence of life 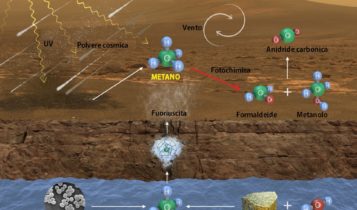 Like we said, though, the study of those molecules is accompained with another discovery: methane in the Mars’ air. Always thanks to the rover curiosity, Christopher Webster (JPL, NASA) was able to demonstrate the presence in the air of the red planet of methane and the variations that it has with the seasons change. We already known about the presence of methane in the martial atmosphere, but now Curiosity found it even on the ground. The discovery of the presence of methane draws the attention of all the scientists, this because we surely know that on our planet most of this kind of gas is made by living organisms. Before to jump to conclusions, though, we have to be sure that those methane doesn’t have other origins. To give an answer to this question they fully studied the variation of concentration of the methane according with the season, getting to the conlcusion that the methane is enclosed in the ice, inside structures called clathrates. Another analogy with the planet Earth, where we have clathrates’ structures too, which enclosed methane too, which, in the case of our planet, is of organic origin.

So is there life on Mars?

Even though this we can’t say surely that on Mars there is or there was life. The thing that we know is that today the planet is death and the only possibility to find forms of life is in the underground, under the shape of bacteria. The thing that we was able to discover is that once the planet had the ideal conditions to host the life and that today there are evidences that we can connect with the past life. Even though the NASA reveals always more amazing discoveries, we can’t answer yet to the question if Mars ever host the life and certainly not if we are alone in the Universe.