By Veronica Perotto On 1 Aug, 2018
Condividi

After all become a superhero it’s up to how much you are ready to spend. And if you are a “genius, billionaire, playboy, philantrophist” you don’t need to come from another planet, to be bite by a spider or to be accidentally exposed to the radations, a suite is enough, a really special suite, though, the Iron Man’s suite. It isn’t a movie or a comic book, the Iron Man’s suite exists for real and everyone can buy it for the “modest” price of 380.000 euros. 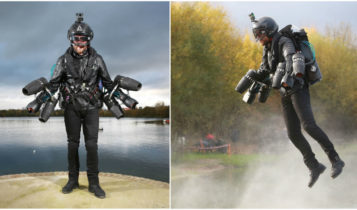 In reality are many the ones that during the years tryed everything to reproduce the famous suite. Between them there is the one that seems to get closest than all to it, he is Richard Browning, english engineer. Browning is a big lover of the flight, and to realize his dream to flight he realize by himself many prototypes of gliders and small electric airplanes, until to the creation of the one that seems really similar to the Iron Man’s suite. The special suite allows the engineer to soar, thanks to 6 turbine engines. The engines that he has on the arms allow him to take off, pointing them on the floor, exactly like Starks shows us on his movies. This happened few years ago, when Browning decided to open a start up, Gravity, with the intention to commercialise his suite. Even though at the beginning he predicted to be able to realize commercialisable models that would cost around the 40.000 euros, today his suites landed on the global marketplace, but the prices are really higher. 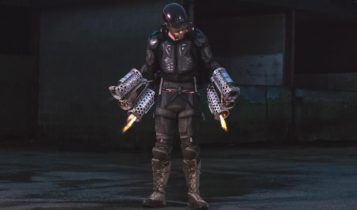 The Daedalus is the real first suite realized and baptised by Richard Browning. The suite like the first models is equipped with 6 engines fuelled with kerosene, two per every arm, plus other two on the back. Browning with his suite is able to take off until 3 meters of altitude and flight at manhole. Deadalus was the father of Icaro, which together flew in the sky with a pair of wax’s wings. Characters from the mythology that flew too close to the sun, which melted the wings and they fell down. The Deadalus was baptised like this even in honor of the Browning’s father, which was himself too an inventor and an innovator, but he passed away, by taking his own life, when the son was still a teenager. Many already realized exoskeletons to use in militar field, but none of them was able to fly. Browning is the first one to be able to soar with a wearable suite. The Deadalus was officially presented in the 2017 but its commercialisation wasn’t ready yet. The first version of the suite never arrived on the marketplace, it was its successor to finally reach a larger audience.

The suite’s version that finally landed on the marketplace is the Jet Suite, which reaches the 50 km/h and is able to take off up to 5 meters from the ground. Unlike the first prototype, this suite is equipped with 5 gas turbines. The Gravity, start up producer of the suite, said that we don’t need any licence to drive it, it is enough few minutes of intensive lessons with an instructor. If we are in the english capital we can go to see the Iron Man’s suite in the stores Selfridges, where it is actually on sale. Browning though didn’t stop himself here, and after that his first refined model landed on the marketplace he promises other two suites in a short time. A more economic version and another one “green”, which should fully work with electric energy.