The mobility’s future sees Uber as undisputed protagonist. The taxi’s company already entered into the challenge, with not few difficulties, of the autonomous driving cars, starting to put the first vehicles between its services. Now, the colossus Uber is up to another challenge, the one of the flying cars, bringing a flying taxies‘ project and the relative platforms, in the most important cities of the world. We will see what will go on in the future, for the moment let’s examine together the promises and the progresses made by the californian company.

The autonomous driving‘s vehicles aren’t any more science fiction but reality, and they quietly go around the streets of the whole world, even if, especially in the last period it seems that they are creating many problems, more then advantages. Uber, infact, provides the usage of autonomous driving’s taxies, where, instead of professional drivers, they can use less skilled staff and, even, completly avoid their presence. At the moment, though, even if the autonomous driving works in a totally way and for the whole trip, the human assistance is still essential. This concept is been experienced, unfortunatelly, on the skin of the first victim of an autonomous driving’s taxi Uber. It is infact of few days ago the news of the first human killed by an artificial intelligence. This thing brings to the issue of the unreliability of those vehicles. It’s, though, enough to make some quick research to discover that the road’s victims every year are around 1,25 million and that, so, we don’t need to demonise the artificial intelligence, when this could happen to every human beings. We have to say though that the proof say that the car noticed the obstacle only a little bit more than a second before the collision, making impossible avoid it. Probably, so, something didn’t work in the artificial intelligence’s reflexes. Probably we need a bit more time for the total usage of the autonomous driving, but in the humans history there is for sure a future without humans drivers. 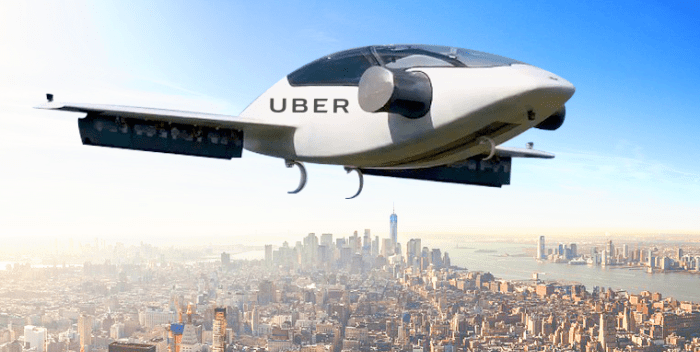 Even the flying taxies’ project is now reality and a step away from its realisation. Already in the 2020, infact, Uber will start the first demonstrative flights, providing to start the commercial ones for the 2023. The city chosen by the company for start this new adventure is Los Angeles and the flying taxies’ prototypes are many. The first model to enter in the Uber’s fleet will be UberAir. The prototype that in few years will become reality, it’s more similar to a drone than to a real flying car, it has four propellers for the vertical departure that make the vehicles substantially more silent and safe than the normal helicopters. The taxi will fly over the city at 1000 feet, supporting a speed of 240-320 km/h. The model is electric and it has an autonomy of 97 km. The first prrototypes provide the usage of a pilot, but in the future they will be equipped with autonomous driving. Obviusly the biggest advantage that a flying taxies’ service will offer is the one to bypass the traffic’s problem in the busy times, predicting, infact, to reduce at least than a third the journey times, with a cost not much higher than the taxies on the ground. By the way Uber isn’t the only company that wants to jump into the air mobility, other companies, like the colossus of Airbus and the german Volocopter, infact, are following it trying to improve the services in the world capitals.

It’s almost time so, just a bunch of years, to see going around the big world’s cities flying taxies and autonomous driving’s cars, radically changing the current concept of public transport and making a jump into the future that only few years ago we told into sci-fi movies and books.

How will the Apple Car be

Travel with a flying taxi is almost reality

What is the robotaxi presented by Tesla?