By Veronica Perotto On 3 Jul, 2018
Condividi

The virtual reality is quickly catching on and it promises to be the future of the technology. All we have to do is to put on a visor and enter in a new world like the one imagined by Ready Player One or the one really created by Staramba. Here you have the best visors for the virtual reality. 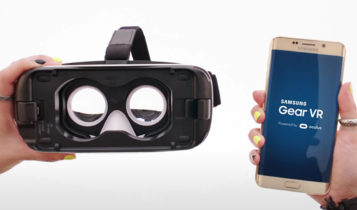 Let’s start from the bottom of the virtual reality with the Google Cardboard, wich is nothing more than a cardboard’s visor where to put our own smartphone, after that we just need to download the Cardboard application for Ios or Android and enter into the future. Obviusly even the functioning of the Cardboard are though limited.

But this isn’t nothing more that the beginning, the reality is that nowadays there are many visors for smartphones, like the Samsung Gear VR. This model realized by Samsung perfectly goes with the companies’ mobile phones, starting from the Galaxy s6 to the Note 5. The visual field is of 110 degrees, like the human one, and the visor is equipped with gyroscope, accelerometer and proximity sensor. The Gear VR’s weight is 345 grams to which we have to add the telephone’s weight. At the moment the online shop of the Samsung’s visor seems to be the best provided, with up to 600 applications, between which there are Minecraft Gear VR edition, Eve: Gunjack and Skylight.

We have then the Google Daydream View, the real visor of the colossus Google, that adapts itself to every smartphone Andorid. Just released the Daydream View isn’t yet available in Italy and, unlike the samsung visor, its store is still quite limited, but it has the right characteristics to grow. 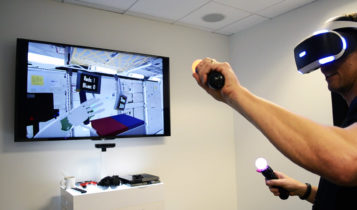 The best way to use the virtual reality’s potentialities is the game, this is why we couldn’t forgot about the console’s visors. The Playstation VR is compatible only with the Playstation 4, it weighs 610 grams but when we wear it we almost don’t feel it. To optimaze the game this visor is equipped with headphones, even if about the resolution it isn’t the best one compared with the other visors in the marketplace. Even though this, being it thought only for its console, this VR is really easy to instal and to use and it is perfectly functional, furthermore, Playstation already counts up to 200 titles for VR.

The virtual reality and the relative visors give their best with a real computer. It was in this environment, infact, that was born the visor that let all of this began: Oculus Rift. This version besides to the visor, the remote and the controller, has a sensor that tracks the player to align him to the virtual world. The experience with the Oculus Rift is unmatchable. The only bad thing is that, becuase it needs a PC to work, we will obviusly have a cable to obstruct our moves. The price is 589 euros plus 119 for the purchase of the Oculus Touch that track our hands allowing us to fully live the experience.

Finally we have HTC Vive VR, considered the best visor because it is the most professional. Infact, this visor can be used not only to play but even with real work’s programs. For example it is possible to recreate the surrounding environment in virtual reality and to shape the 3D objects that we see in front of us. Thanks to the sensors that inform us about the surrounding environment it allows us even to walk around the room in virtual reality.

Staramba is the first real virtual world that just opened its doors and for this reason it needs a visor to work. The compatible visors for Staramba are the already mentioned HTC Vive and Oculus Rift.

ConceptD, Acer is looking at creatives (to Apple’s dismay)

Mobile World Congress 2019, all the news