The videogame that promises to relaunch Electronic Arts and Bioware is around the corner, the next 22th of February, infact, will come out Anthem.

It promises to be a game that will remain in the heart of all the science-fition’s videogame lovers. A cooperative action RPG which takes place in a fantastic and mysterious open world. It’s impossible to not compare it with other games like Destiny or Mass Effect.

There are still a bunch of days and we will find out if the expectations will be paid, meanwhile, right today was released the Open Demo, available from the 18:00 of today (1° February) until Sunday 3rd of February.

The Anthem’s universe is fascinated, mysterious and unexpected.

The world where we are has been created by the Anthem, source of pure creation.

It is by the way unfinished and the same Anthem has devastating effects, by generating storms, catastrophes and terrible mutations.

“At the beginning, the Gods harnessed the Anthem, a source of pure creation. Wonderous lands erupted into existence”

Our headquarter is Fort Tarsis, the starting and ending point of all our missions. The only safe refuge, in a world threatened by the Dominion.

The Dominion is allocated on the Mountainous North and it is a cruel society, protected by the soldiers. At the head of the society there is the Monitor, which wants to get the hands on the Anthem. Our mission is, obviusly, to stop it.

At Fort Tarsis we are safe. Here we can interact with the characters of every social background and to carry out the missions that we will receive. Fort Tarsis is our home.

Our headquarter is one of the fortified towns risen in the world after that the Legion of Dawn set free the humanity from the caos and the desperation that was spreaded in the world.

It’s been only few centuries since when the Legion fought back the deadly forces and a new enemy is threating to bring the world back to the caos. The freelancers fight to keep the peace in the world and we must join them.

The freelancers are expert pilots of javelins, that fight to defend Fort Tarsis and their people. There are four javelins between which choose:

The javelins can be equipped according to our needs or preferences. To personalise weapons, armor and the whole asset we have to go to the Forge of Fort Tarsis.

The equippments are characterised by six levels of rarity: common, uncommon, rare, epic, masterwork and legendary.

Besides to equip them, the javelins can be even personalised, always in the forge, with paints and materials. 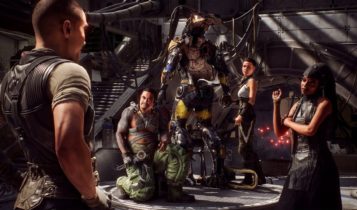 Next to us, during the many missions, there will be a crew to fight with us:

To deal with the cruel, ruthless and wonderful world that is waiting for us outside the Fort Tarsis’ walls, therefore, there will be even other players, with which we could share the missions.

During those 3 days, like mentioned before, it’s available the version Open Beta, which will finish the 3rd of February. From the 15th of February, then, it will be the time of the EA/Origin Access Premium subscribers, that will have the possibility to try the complete version for 10 hours.

Finally, for who already made the pre-order, the game will be available from the 22th of February, on Microsoft Windows, Playstation 4 and Xbox One.