When the videogames help us to lose weight

Especially in the last period the videogames are ever more blamed as something absolutly negative and to be avoided by the children. They are believed to be responsible to violent behaviours, addiction and alterations, those hobbies though shall not be demonized because they have even many positive aspects. Which ones? Just to take an example, it seems that they would help to lose weight. Let’s find out how.

Against obesity and overweight

Like this it can appear a nonsense that the videogames, for years blamed to make the children less active and more sedentary, can help to prevent this kind of problems.
Firstly I want to be clear that in this article we won’t list the videogames born with the purpose to lose weight (for example the ones to make fitness or zumba at home). To better understand what we said we need to do a step behind. Let’s start from the assumption that the videogames’ addiction is real, and surely isn’t something positive.
The people affected to those addictions, infact, avoid any other activities that isn’t the videogames’ hobby, putting in danger their mental and physical health. 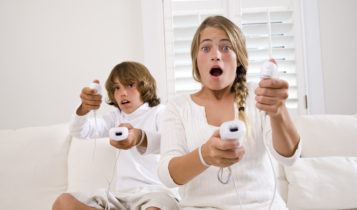 By the way, like all the addictions, if there is an overuse can be dangerous but, in the case it is used rightly it can bring even advantages. To demonstrate the fact that the videogames can help to combact overweight and obesity was up to a study made by the Pennington Biomedical Research Center of the Louisiana State University.
Specifically they studied 46 teenagers with an average age between 10 and 12. Obviusly all of them had clear problems of overweight and obesity. Half of them (23) was assigned to gaming’s group with the imperative to don’t change their eating habits but to add three gaming’s sessions of one hour per week with an exergame between which Your Shape: Fitness Evolved 2012, Just Dance 3, Kinect Sport Season 2 and Disneyland Adventures. The other half was just observed during the daily acitivities.

The results of this experiment were really astonishing. The 23 teenagers of the first half made this kind of activity for 6 months working on the videogames that test them under a physical point of view equipped with their Fitbit to control the development and a book with the targets to do. Of those 23 teenagers just one didn’t finish the duty, while the others arrived at the end.

The final results was a decrease of the body mass index of the 3% instead of the increase of the 1% saw in the other group. 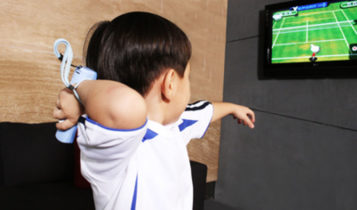 What does it mean

Like we could see the experiement made brought to really interesting results. One more time the thing that arise is that we don’t have to demonize nothing but it is essential to analize all the shadows to verify if there is really something positive.
Without any doubt this doesn’t mean that the videogames’ addiction isn’t real and danger if we don’t deal with it in the right way.

By the way by taking some precautions it is possible to avoid this kind of problem. Here you have some practical suggests:

The useful apps to travel

Healthcare: the virtual reality in the health