By Veronica Perotto On 3 Sep, 2018
most bizarre drones
Condividi

The world is nowadays full of drones, small flying robots controlled through smartphones or controllers. Many of them are nothing more then a toy, others are professional, others take bird’s eye views, others else are for military or governative uses, but between all of them which are the ones that stand out? Here you have some between the most bizarre drones.

Airblock is a middle ground compared with the drones available on the marketplace, neither too professional, with frighful prices, nor super economic but with the appearance of a toy. Even though it doesn’t take place between the professional drones, Airblock Drone has some really interesting characteristics. It is a fitted drone, with six modules to assemble through a magnetic mechanism like Lego pieces. Airblock can fly like every other drone, but it can even slide on the water like an hovercraft or run on the ground. The six modules that freer rein to our creativity can be composed around the central core of the drone, an engine programmable through computer. Once assempled the modules and setted the environment where it will run (air, water, ground) everyone can enjoy Airblock Drone and, in case something goes wrong, the drone won’t end up in thousand pieces, it will just disassemble itself.

Dragon is another example of modular drone, realized by the University of Tokyo. This time though we aren’t talking about a middle category drone, but neither of something similar to the professional drones available on the marketplace. Dragon Drone is something totally innovative and astonishing. The prototype is composed by four modules, assemblable one after the other, but it is provided that they can arrive to 12. According to the number of modules of the shape shifter drone it can take basically every kind of shape. But the most amazing thing isn’t only that the drone can change its shape while it’s flying, but it can do it by itself, according to the obstacles that it has to go through.

ZeroTech Dobby Pocket Drone is a small drone that can be closed on itself becoming a compact rectangle to put in the pocket or inside a bag in whole safety and comfort. The drone, which has four propellers that allow it to fly when it is opened, when is closed it has the size of a smartphone and the weight of just 199 gramms. But this practicality isn’t the only characteristic, Dobby, infact, is the first drone which was born with the only purpose to take selfies, and for this reason it was called even selfie-drone. 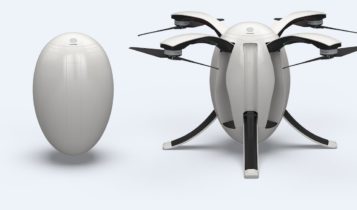 To see it at the beginning, with its tipical egg shape, it seems a modern lamp, an ornament piece, an easter egg, everything except a drone. And instead it is really a drone. When the drone isn’t working it is closed like an egg, hiding the propellers, the arms and the landing gear. When it works, instead, we find out that the PowerEgg is an advanced copter, which takes off in few seconds. Even the controller is different to everything else. It is infact a Motion remote controller, which means that we can indicate the wanted direction just by moving the joystick. Alternatively we can control the drone even through a traditional controller or the app on the smartphone. 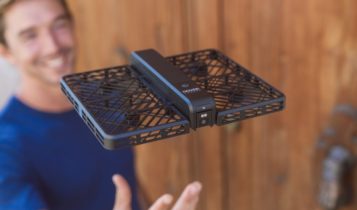 The Hover Camera Passport is basically a “flying camera”. It is a small compact and safe drone, with the propellers hidden inside some grates and the central core composed by a camera. It has an autonomy of 10 minutes and it can go only 20 meters far away from the operator. But this isn’t important, because it’s main purpose is the one to help us to take perfect pictures. 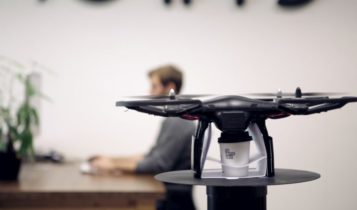 The Coffee Copter is still only a project, thought and patented by IBM. The drone, which will quietly fly between the locals of an office, will be able to autonomously recognise the employees that urgently need caffeine (sleepy eyes, tired face, etc). After that it will go to the closest coffee machine, to which it already said to prepare the coffee, it will take the hot drink and it will bring it to the one that needs it. If someone needs coffee but doesn’t want to wait until the drone will notice it can straight call it and order it to the drone. It, infact, will be able to recognise even in the middle of a huge group of people a person that is looking for it, for example by shaking the hands.