In the 2011 was built the first spaceport for the future turistic space trips. Since that moment the Virgin and its creator Richard Branson, together with all his staff, never stop to dream to reach once the space with their vehicles. 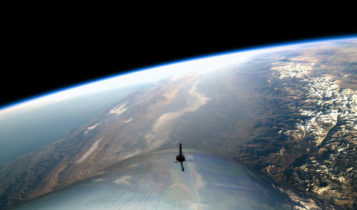 The Virgin Galactic is today between the main competitors to the spacial tourism and, probably, between the two that made much more steps forwards about it.

While SpaceX releases the first ticket for a flight on the BFR, with direction Moon, the Virgin Galactic is going to finidh the infrastructures that will bring its SpaceShip Two in the space.

They will take off from the Grottaglie’s spaceport, in Puglia, for the price of 250.000 dollars per ticket.

The Virgin is still preparing itself for the advent of the spacial tourism, by promising to be able to bring the first turists already in the 2020. Meanwhile, after a serie of tests, the last 13th of December the SpaceShip Two finally reached the space.

Obviusly before to reach a so high quote the company made many previous tests. The SpaceShip Two, brought to 15 kilometers of altitude by the mother airplane (the Space Knight Two), it would then autonomously reach an altitude of 100 kilometers.

That’s the final flight plane. Now to arrive to this kind of result they need many proofs.

The SpaceShip Two made the first proof’s flight in the 2016, hunged to the SpaceKnight Two. After that, in the April of this year it made a serie of glide’s tests and three of them by using its own thrusters.

The flight of the 13th of December 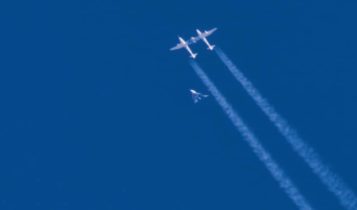 The 13th of December is a date that Richard Branson, the two pilots and the whole team that helped to the realization of the project, will never forget.

The Virgin Galactic’s ship reached the 82,7 kilometers of altitude, passing the quote of 80 kilometers which signs the edge between the terrestrial atmosphere and the space.

The SpaceKnight Two took of from the Mojave Air and Space Port, in California, at the 7:10. At the 7:59, at an altitude of around 13,1 kilometers, over the Mojave desert, is been unhooked the SpaceShip Two, with the two pilots on board.

After few seconds the ship switched on its thrusters, pushing itself up to a speed of Mach 2,9 (3.550 km/h), by reaching the 82,7 kilometers of altitude.

At this point the ground control complimented the two pilots: “Unity, welcome in the space”.

After that the pilots brought back the SpaceShip Two to the ground, entering back in the atmosphere at a speed of Mach 2,5. At the 8:14, the ship touched the ground, with a perfect landing on the airport from where they left.

The historic enterprise finally crowned the Virgin’s dream. “Today, for the first time in history, a crewed spaceship built to carry private, paying passengers reached space. Today we completed our first commercially filght, and our pilots earned the commercial astronauts’ wings. Today, we demonstrated that the Virgin Galactic can really open the space to change the world”, proudly claims Richard Branson.

And again: “This is a truly momentous day, and I can’t be more proud of our tema, which together opened a new chapter in the space exploration”. 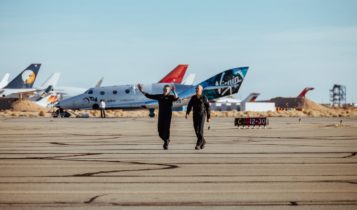 The historic enterprise saw involved two expert pilots, that as first brought a spaceship for the passenger transport in the space.

Sturckow, instead, is an ex NASA astronaut, that flow in four missions of the Space Shuttle, by commanding it twice.

Space or not space? 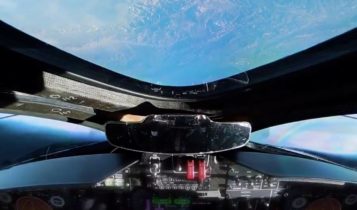 To restrain the enthusiasm there who says that in reality the Virgin never reached the minimum edge to be considered space.

Conventionally it is generally used the line Karman, 1oo kilometers above the sea level. But it’s hard to define a clear line that divides the atmosphere from the space.

The World Air Sports Federation is already a while that is thinking to lower the line to 80 km, even due to the previous events. The US Air Force together with the NASA, recognised infact the wings of astronaut to the pilots of the X-15, right outside the edge of the 80 kilometers already in the years ’60.

For the NASA and for the air force the edge is so fixed to 80 km, even if conventionally is rounded to 100, but the most sceptical, want to slide the edge until the 150 km.

There isn’t any certainty and the Virgin Galactic is the first private company for the passenger transport to passed the edge, so it can fix the edge wherever it wants.

Virgin Galactic welcome to the space!

A new break for the CERN