Every object, action, custom or place where we are, that we do, that we see is ever more technological and futuristic. Every corner of our home is filled with a small piece of future. That future achievable only with a bit of effort, because besides to be technological and futuristic, we have to take care even to the planet on which we live. And due to the fact that every moment of our day becomes ever more hi-tech, why don’t do it even with the most private moments? However who more who less spend few time alone in the bathroom, there is who then spend a lot of time with “himself” and so who does think about those moments?

A problem that is still  present 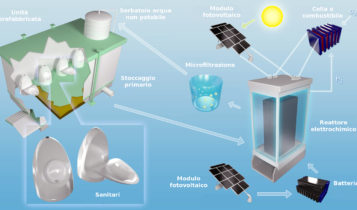 Nowadays it can seem a nonsense. All the cities of the richest countries of the world have a sewer system that arrives until the treatments and disposal facilities, through thousands kilometers of tubes.

All of this has a surely high cost, that the poorest countries can’t afford. The thing that seem obvious in reality it isn’t, let’s think that at the beginning of the nineteenth century, the introduction of the ceramic tiles in the bathrooms, saved the life of thousands humans.

Nowadays in the world there are still 2,3 billion of people that haven’t access to the sanitation structures. This kills every year half million of children less than five years old.

All of this has a cost for the healthcare which is around the 200 billions of dollars every year, while Bill Gates, spent, in seven years, 200 millions of dollars, to develop a technology to solve the problem.

Actually it would seem that Bill Gates has a real obsession for the bathrooms. In his home, infact, there are 24 bathrooms! But, obviusly, one of the visionary richest man in the world is not limited on those frivolities, but he is interested even to the world’s problems.

In the 2011, infact, the Bill and Melinda Gates foundation gave 270.000 dollars to the World Toilet Organization, to support the problems about the toilet facilities in the poor countries of the world.

“There are few things I love talking about more than toilets” – Bill Gates.

It is since there that he started to think about a definitive solution for the problem. The challenge that Gates launched to its teams was to realize a revolutionary wc, able to work without the usage of water and to bypass the sewer, all of it should work for less then 5 cents per day.

“From diamonds nothing is born, from the manure fertilizer can born”. After seven years of work the Gates’ team won the challenge. A futuristic toilette that transforms the human wastages in fertilizer, without water or sewer, “The Nano Membrane Toilette”.

The wc divides the solid disposals from the liquid ones, which can be individually collected. The firt ones become fertilizer. The second ones, filtered by a serie of membranes, water.

The water isn’t enough clean to be considered potable, so it isn’t intended for the human consumption, but it can be used for other purposes, like water the plants. The toilette is been presented by Bill Gates in Bejing.

The choise of the presentation’s place isn’t a case; the Microsoft’s co-foundator leaves anything to choise. The China, infact, is in the middle of the “toilette revolution”. It is since the 2015 that, the chinese president Xi Jinping, let the revolution begin, making important improvments to the public sanitation.

Even though this many smaller towns and countrysides of the country don’t have yet access to the sanitary services. And it is right on those places that Gates wants to bring his wc.

But he will still need many years before that the future’s hi-tech toilette, will reach the poorest areas of the world. At the moment the costs are still too high, but Gates believes that in a short time, when his wc will cost less than 500 dollars, they will be installed in the biggest part of the world.