By Veronica Perotto On 22 May, 2018
ossigeno
Condividi

One of the most amazing thing about the universe is the concept that more far away we are able to see more back on the time we return. Let’s think, infact, how this phenomenon happens in our daily, when we look up the Sun, that one is the past light, exactly the one of 8,33 minutes ago. At the same way if someone from a galaxy 65 million light years far away was looking at the planet Earth, he will see the dinosaurs. It is like this that the telescope Alma saw the most ancient oxygen of the universe, in the galaxy Macs1149-jd1, 13,3 billion light years far away.

The discovery of the presence of oxygen in the remote galaxy Macs1149-jd1 means that, at just 500 million of years after the Big Bang, those stars were already formed and they already expelled the oxygen, being able to fix the birth date to just 250 million years after the universe birth. Determinate the birth of the galaxy Macs1149-dj1 around this date, makes her the most ancient one observed and makes new doubts about that age of the universo called “cosmic sunrise”. Therefore, the human was never able to go so back in the time, we are almost arrived to observe the beginning of the universe.  “Determinate the beginning of the cosmic sunrise”, explains Richard Ellis, astronomer at the Ucl of London, “is a Holy Grail of the cosmology and of the galaxy’s formation. With those new observations of Macs1149-dj1 we are getting closer to the direct observation of the stars light birth. Because we are all made by stars’ matter, this means finally find out our origins”. 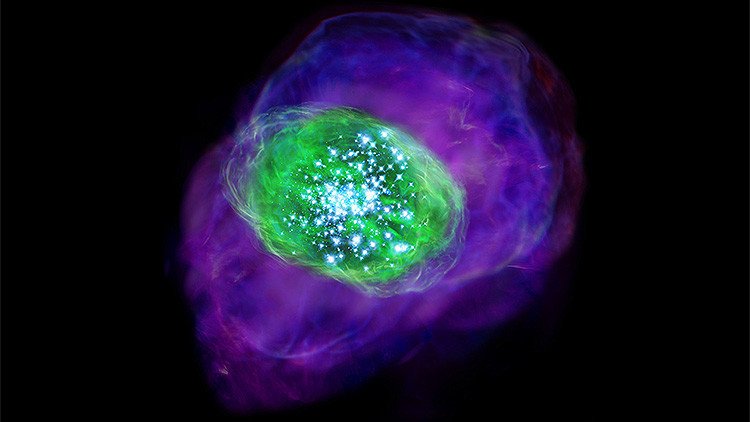 At the beginning in the universe didn’t exist the oxygen, but it was meanly made by hydrogen and helium, and it was by those two gases that the first stars took shape, which were really different and extremely more massive than the current ones. After that, the first oxygen has been released in the space, caused by the nuclear fusions happened in the dying stars. The released oxygen, at the first stars’ light, composed by hydrogen and helium, appears fluorescent. And it was in this way that the most ancient oxygen of the universe is been discovered, in the remote galaxy Macs1149-jd1. Furthermore, is supposed that the stars observed in the galaxy were generated in two different phases. In the first star boom, just 250 million years after the universe birth, the first stars were born, which pushed away from the galaxy the gases, stopping the formation of new stars for a certain period of time. After that the gases fell down back in the galaxy making a second boom that gave the life to a new generation of stars that lighted up the oxygen, observable today through the telescope Alma. It is incredible how everything happened just 500 million of years after the universe’s birth. This galaxy opens, so, the borders for an exploration in the cosmic history in an age, until now, totally unexplored.

The discovery, published on the “Nature”, is to award to an International collaboration, without which every single team wasn’t able to reach the conclusions. The firsts to see the presence of oxygen in the galaxy Macs1149-dj1 were the astronomers of the Oasaka Sangyo University, in Japan, but only the team of the University College of London was able to estimate the exact distance, fixed at 13,28 billion of light years. “I was electrified to see the sign of this remote oxygen”, admits Hashimoto, head of the japanese team, “The discovery pushes back the borders of the observable universe”. Both of them used the best instruments of the planet, only thanks to the radio observatory ALMA and the Very Large Telescope of the ESO, infact, is been possible to observe so far away and so back in the time. Finally, to rewrite the history of the galaxy and gives a date to the formation of the first stars, they used the telescopes Hubble and Spitzer. A jump back on the time, so, that bring us forward into a new era in the study of the cosmic sunrise.

The new and more detailed map of the sky

The best place to look at the stars

Odd Radio Circles, there is something new and weird in the universe