Already from its official launch, in the 2011, Snapchat shortly climbed the most used social networks’ league, registering 300 millions of actived users and 10 billions of viewed videos. In the last few months, though, the company Snap is been publicly traded and it lost more than the 40% of its value. To avoid this inconvenience, the Sanpchat’s founders decided to try with the e-commerce way and, following the Facebook Messenger‘s steps, they launched Snap Store, a virtual shop inside the app, where it is possible to sell branding gadgets.

Snap Store: the e-commerce’s way according to Snapchat

Snap Store is located in the Discover‘s section of the social and at the moment it only allows to buy products related to the brand, between them there is a hot-dog doll (20$), a sweater with the famous ghosty (40$), a t-shirt with a puppy’s filter (25$), and so on. To buy them we just need to scan the Snap Code with the camera and click on the virtual shop’s icon. Keep attention, though: the exclusive objects are available only for a limited period and they could disappear at any moment without notifications. About the italian marketplace, it is present a notification that tell the users that the seller’s couldn’t make deliveries to our country. According to what said by the company’s spokesman, the project wasn’t thought to be an economic revenue’s channel, but a way to increase the community and secure the users. It is conceivable, however, that in the future the shop could sell other company’s products that they publicise on the app. At the moment, a new stock of products is been predicted for the day of the 8th of February. 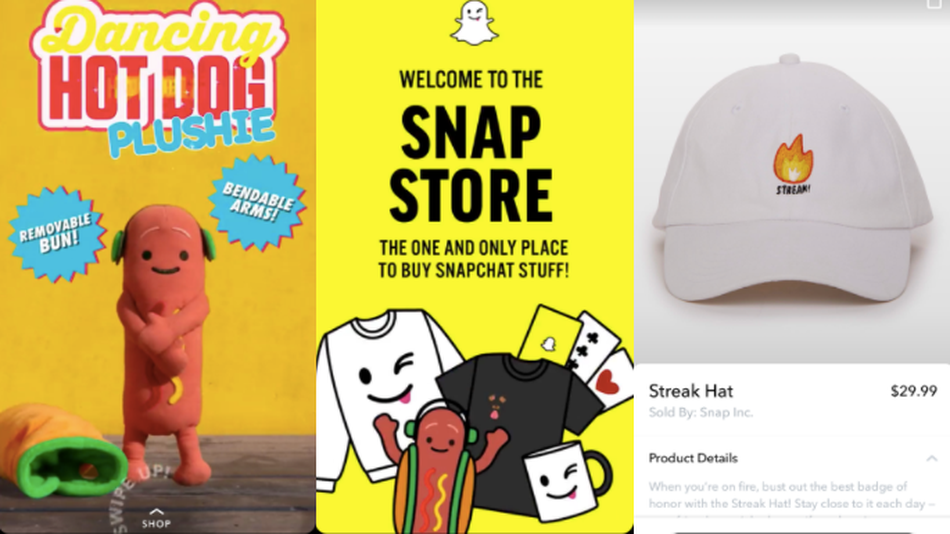 In June 2017, Snapchat launched in different countries Snap Map, a new service which allows the users to share, in real time, their positions with friends and to see where they are on the map. At the beginning, the thing seemed interesting and the daily users were almost 30 milions. During the weekends, the application seemed to help to find in the center the friends. But the fairytale, for Snap, was short: according to Daily Beast, the Snap Map’s usage, at the end of the summer, passed to 19 milions of users per day, a small part of the 179 milions that every day use Snapchat. Even Discover, the section reserved to the editors for let them share Stories and contents, doesn’t seem to collect any results: between April and September, Discover attracted not more than 38 milions of daily users, around one-fifth of all the people that use the app. And how we can forgot about the Spectacles, the Snapchat’s smart glasses that passed from being one of the most popular gift of the last winter to a slowly decline. At the beginning of October the Snap’s CEO, Evan Spiegel, said that the company gave “more than 150000 units” of them, a poor number if we think that there are hundred milions of units not sold, even if this number includes also not-assembled products, that have some parts which could be reused for other objects. According to the CEO, the Spectacles were just a test that had, anyway, a positive result, because, according to his informations, the sales’ passed the first Apple’s Ipod ones. But Spiegel, even said that the hardware should become important for the company, only in 10 years. Snap has now a hardware team of 150 persons, even if we don’t know what are they working for, but the indiscretions talk about drones or other augmented reality glasses. Let’s see if, with Snap Store, the famous company will learn from the old errors and it will improve its status.

Vahana: here you have the first Airbus taxi-drone