Cold atom science, one step from the absolute zero

By Veronica Perotto On 2 Jan, 2019
Condividi

The absolute zero is around the 0 degrees kelvin, precisely at -273,15 °C. Under this temperature, theoretically, is impossible to go.

However the research of the cold, in the science world, get always a little more forward. In the 2013, a scientists team of the Max Planck Institute announced to went a breath under the absolute zero.

But the turning point in the field of the cold atom science, arrived in the 2017, when was inaugurated the CAL (Cold Atom Laboratory) of the NASA, on the International Space Station.

The lowest temperature ever registered, in nature, on the planet Earth is -98°C, that in the winter of the 2010 hit the Antarctica. In the dark side of the Moon, instead, the temperature arrive until the -170°C.

But to touch the absolute zero we have to go in the intergalactic space, where the matter is such rarefied to drop to few atoms of hydrogen for cubic meter.

Here the temperature touch the absolute 0, at -270°C. But it seems that the absolute zero is unreachable, at least in the nature.

The experiment of the Max Planck Institute brought a cloud of atoms of potassium under the absolute zero, but just for a moment. It seems so to be the laboratory CAL, onboard of the ISS, the current coldest place in the Universe, with temperatures that drop until -273°C, once step from the absolute zero.

Why is the cold atom science important?

The absolute zero was theorized in the 1850, by Lord Kelvin, which gave it the definition of the coldest temperature reachable by a body. To that temperature the particles that compose it are at the lowest level of energy.

He never believed that this temperature could once be reached or, even, passed, even if only of few nano kelvin.

With such low temperatures is possible to study the atoms like never before. At those temperatures the atoms move really slow, until 200.000 times slower. The experiments put the basement of the cold atom science, the one that in the future will open many new doors.

But basically why is the cold atom science important? It will allow us to study new systems of energy’s transmission.

But even to study the dark energy, that big mystery of the universe that brings it to expande itself. Even the gases brought to temperature around the absolute zero, infact, tend to expande themselves, combating the gravity, exactly like the same whole universe.

The experiment of the Max Planck Institute 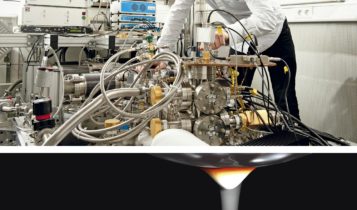 Like we said the first one to drop under the absolute zero were the scientists of the Max Planck Institute. In the 2013, they brought a cloud of atoms of potassium few nano kelvin under the -273,15°C.

The experiment was the conclusion of a work months long. The scientists trapped the atoms of potassium in a cage of laser rays and magnetic fields and started to give them energy.

The lasers and the magnets kept stuck the atoms of potassium during the experiment and the temperature started to drop.

The temperature went under the absolute zero only for few milliseconds, but that was enough for the team to see the atoms like no one before.

The Cold Atom Laboratory of the ISS

In the 2017 was inaugurated the CAL, in the terrestrial orbit, on board of the ISS, which at the moment seems to be the coldest place in the known universe.

Here they study the atoms at temperatures that little touch the absolute zero. The one that scientists and astronauts study inside the CAL goes far beyond what is possible to do on the Earth.

We saw that exist other laboratories that are able to reach those temperatures, but on the planet there is the nuisance of the gravity.

This avoids long time experiments. Problems that, instead, in the space there isn’t, so finally it is possible to really see the atoms slowly move, not anymore for just a bunch of milliseconds.

We obtained the fifth state of matter