Mercedes: all the details about the new future’s smart lights

If you always dreamed to have a vehicle which keep us updated about the road hazards and about the weather conditions, through a bright simbol screened on the asphalt, you will finally be accomodated. Daimler, famous german producer of cars, with the head office in Stoccarda, claimed that the Mercedes Maybach S vehicles will be equipped with futuristic light installations, called Digital Lights. The technology will be showed for the first time at the Motor Show of Ginevra and it will start the production during this year.

Here you have the future’s light made in Mercedes

Mercedes showed a first concept of LED in the 2015, talking about the research’s car F015, but those lights are more precise and multitasking, and they reduce the risk of blindness for the other drivers. Thanks to an headlamp with more than 2 millions of pixel, infact, the lights are able to show useful informations to the driver so to let him know about the surrounding and avoid any possible road hazards. Every available information, even the dates about the satellite navigation, the imagines captured by the cameras and the traffic given by the sensors, is used to personalize the distribution of the flow. The big feature is represented by the possibility to screen on the asphalt some bright simbols in high resolution. When we go through a construction site, for example, two bright ways, matching the whole size of the car, are screened on the street, helping the driver to orient himself/herself. If, instead, a pedestrian is recognised in the danger zone, close to the street, on the surface appears a signal that indicate him, in addition to the simbol already put by the Adaptive Highbeam Assist. Ola Källenius, member of the Daimler AG management board and director of the group of research and development of Mercedes-Benz Cars, claimed like that: “With a resolution of more than one milion of pixel each headlamp, DIGITAL LIGHT not only make the ideal conditions of light for every driving situation, but improve even the visual aid of our system of driver assistant”. At the moment the commercialisation of this technology has to be tested by the institutions of every country and, if it will be approved, it will represent a huge revolution in the vehicles’ sector, that, according with the analysts, will be dominated by the electric cars. The topic about the road safety is, obviusly, on the agenda, because of the increasing number of death for accidents every year. 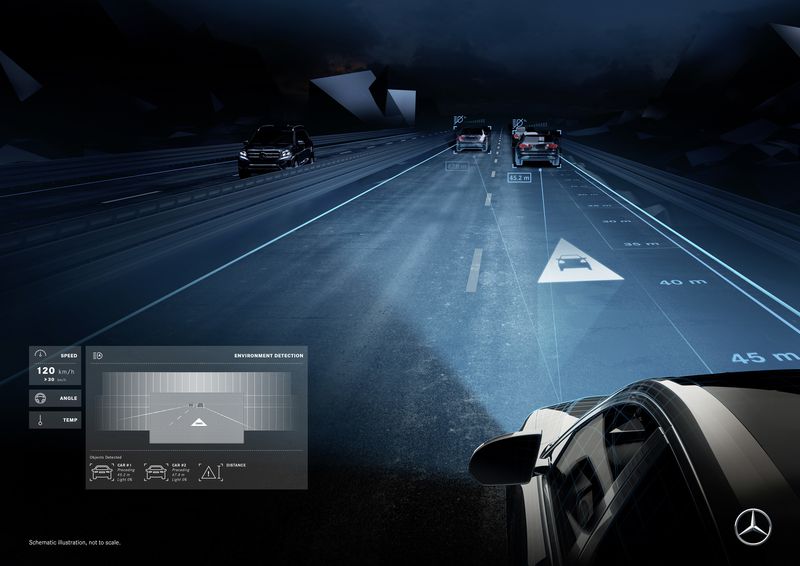 Maybach S-Class: the automotives’ luxury according with Mercedes

The Mercedes-Maybach S Class seems to be one of the more luxury and confortable models between the ones showed to the Palexpò during the Ginevra’s Show. It is the direct rival of the most famous Bentley and Rolls-Royce, and of the other sedans top of the german industry, the Audi A8 and the Bmw 7th series. The vehicles of the famous german company is made with exclusive external features, alloy wheels of 20 inches and massive vertical rods. We have to talk even about the presence of two back seats that allow as comfort as the one of the private’s jets. Mercedes, so, was able to create a real living room on four wheels. 5 meters and 462 long and with a step of 3 meters and 365, the Mercedes-Maybach S Class gives now 20 cm more to the occupants, an important increase compared to the same “long” version of the Mercedes Classe S, with the presence of Executive seats. There will be three versions that will debut in April: S 560 with 469 Cv, S 560 4matic with the same power and four-wheel drive and the S 650 with the massive V12 6.0 with 630 Cv. The target for the company of Stoccarda is to consolidate the global success, selling in China, Russia and USA, between the major marketplaces, that saw 25000 registrations of the model Maybach of the S Class from the launch in February 2015 and an important share (one every ten in the 2017) of the purchases of this ultraluxury model inside the sector of Mercedes S Class.

Car sharing: what is, how it works and which are the advantages