Saturn is a planet which lets us always dream. Just 10 meters of thicknes, for an extension of 120.000 kilometers, the rings of the sixth planet of the solar system are composed by billions of small and tiny objects (from the micrometer to the meter), that orbit around it.

A show of grey, brown and red, that dyes the collective imagination, thinking to one of the most astonishing planet of the solar system. One of the thing that always remembers us the variety and the diversity of the universe.

But the scientists launch a shocking new, which destroies the travels of many dreamers, Saturn is destined to lose its rings.

What are the rings made? 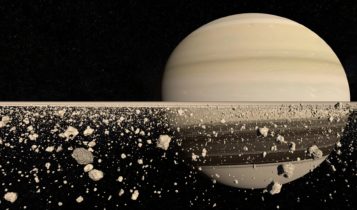 Like we said the rings are made by infinite objects with the sizes that go from the micrometer to the meter, which orbit around the planet, making thin circles of just 10 meters.

Those objects are mostly ice blocks. But we don’t know so much about the rings that make famous the remote and frozen planet. Only with the approach of the probe Cassini, in the 2004, we were able to know something more about them.

The rings are divided in seven sections and only of the ring D we know the birth. Constant phenomenons of criovulcanism on Encelado (Saturn’s Moon), infact, generated a surplus of material that went to create the ring D of the planet.

We don’t know, instead, the origin of the other rings, even if they thought they can came from the destruction of one of the Saturn’s moon by another satellite or a comet. Or, that it is a surplus material coming from the formation of the same planet.

Rain of rings on Saturn 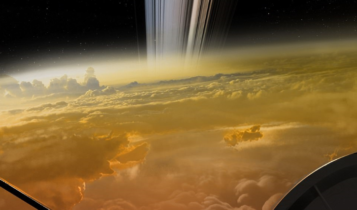 We are used to think to this mysterious planet, surrounded by its rings that make it unique and majestic, crowning it as the most beautiful planet of the solar system, right after our small blue and green ball, obviulsy.

But few know that the material of which they are composed regularly fall down on the planet, in a rain of rings. The rain was already observed around 40 years ago, with the flyby of the probes Voyager 1 and 2.

The material, mostly composed by ice particles, jumps in the high atmosphere, creating a thick and almost perpetual rain. It is estimated that the rings’ rain matches an olympic swimming pool every half hour.

With the rythm estimated by the probes Voyager Saturn will fully lose the rings in 300 millions of years, becoming a normal and banal gas planet.

A lot of years, we could think, but the rythm of the rain is dramatically increasing, the probe Cassini, infact, reported dramatic conlcusion. The rings of Saturn haven’t 300 millions of years any more, but just 100 millions.

The short life of the Saturn’s rings

The image of Saturn, adorned with its amazing rings, is a cherished memory for the human race, reported not only from space missions, but even by paintings, dreams and fantasy of alien worlds.

100 milions of years seems a period of time basically infinite and who knows if there will be still some exponent of the humanity and if they will remember the ancestral greatness of the sixth planet of our native solar system.

However 100 millions of years by considering them in the Universe’s time aren’t so many.

Adding to it even the fact that has been estimated that the Saturn’s rings are relatively young, we have to consider ourselves extremely lucky to appeared in the universe right in the years when the immense gas planet flaunted its seductive rings.

82 moons is the Saturn’s record