All are exicited for the amazing phenomenon of the Northern Lights, light waves that light up the frozen artic skies. But this isn’t the only light natural phenomenon to leave us breathless. The Light Pillar are columns of light that from the horizon rise up toward the sky, dying the northern night with colour.

An astonishing phenomenon which seems to come from another planet, but in reality it isn’t so different than the classic aurora, just less famous.

The birth of the Light Pillar

The Light Pillar are an optical phenomenon which creates colorful columns that take place vertically up and down a light source.

The light source can be the sun, which still barely shines the ice, in the northern places of the planet, right under the skyline.

The effect can came from the Moon’s light or, even, every artificial light source.

Whatever is the root cause of the Light Pillar, this amazing phenomenon is due to the light’s reflection from tiny ice crystals hanging in the atmosphere.

Those ice crystals are hexagonal shaped and ususally flat and their formation takes place when the air temperature gets close to the freezing point and the humidity starts to condense.

This specific configuration let them take place horizontally hunging in the air. Their flat surface turns into a mirror which reflects the light up and down.

But why does this particular column shaped phenomenon, which points up from the horizont to the sky, happen? This is due to the turbulences which spread the ice crystals in the air. Putting them flat faces not any more perfectly horizontally, but lightly inclined.

Have so to take place a serie of events, because this particular phenomenon takes place, to make Light Pillar extremely rare.

Where to see the Light Pillar? 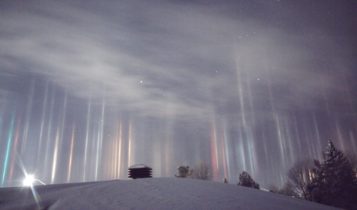 The Light Pillar are an extremely rare phenomenon, to not confuse with a simple light beam, which often can happen on the top of the artificial lights, which for example can be a street light along the road.

The best places where to see the Light Pillar are the northern countries of the world: the Arctic Circle and the immediate surrounding.

The North Europe countries are the best places where to go hunting the most astonishing light phenomenons, between which even the Light Pillar.

Norwey, Finlad, Island and Russia are perfect places to hunt the Light Pillar and the best moments to find them are the sunrise and the sunset. If during our research we find out even an Aurora Borealis or some other light phenomenon, we should be really lucky.

Rarely, at the end or at the beginning of extremely cold nights, the Light Pillar appeared even in unusual places, far away from their normal areas. Phenomenons of Light Pillar have been as an exception reported in Tucson (Arizona) and San Francisco (California).

A sky of light

Aurora borealis and light pillar aren’t the only amazing natural shows of ligths which can appear in the norhtern skies. Together with them we find out the halo, white light’s circles that appear around the Sun or the Moon, even them are due to the formation of ice crystals in the air.

Or even the parelio, that creates two small twins suns, respectively on the right and on the left of it, even them are due to the reflection of the light on the ice crystals.

Many confuse the Light Pillar or the other light phenomenons for every thing mysterious and paranormal. Sometimes the light columns were pointed as beam left by phantom alien spaceships. But it isn’t nothing more than a natural phenomenon, extremely rare, but fully scientifically explained.

Rarely more than one phenomenon is been noted simultaneously and when it happens is once on a lifetime event. In November of the last year, in Siberia, the Light Pillar appeared together with a halo around the Moon.

How do we feel the colours of the northern lights